My avid reader will be aware of a very recent post on the birthplace of the industrial revolution. You would be forgiven for thinking I got somewhat pub obsessed in my reflections on days gone by in Manchester. So, here is my opportunity to salute the architectural legacy of Manchester (with maybe one potential sighting of a pub!).

Artistic cats will be particularly drawn to the Manchester Art Gallery on Mosley Street, a Grade I listed building in Greek Ionic style built in the 1820’s, it acts to remind us that cultural appreciation is free to all… well, at least those who can be bothered to take their gaze temporarily away from a screen these days.

Meanwhile, cats who like to read something in a more traditional style may be attracted to the Manchester Central Library on St. Peter’s Square. Loosely based on the Pantheon in Rome, this Grade II listed building, combines a columned portico fronting a rotunda, built in the 1930’s. It succeeds the original and first free lending library of 1852, when Manchester demonstrated a ground-breaking recognition of the benefits of providing education resources for its local population.

For orchestral cats there is the Manchester Free Trade Hall. Built in the 1850’s as a monument to the repeal of the Corn Laws, this building on Peter Street is also built on the site of the Peterloo Massacre of 1819. It became the home of the Halle Orchestra, before more recently succumbing to mammon’s requirement for more hotel space. 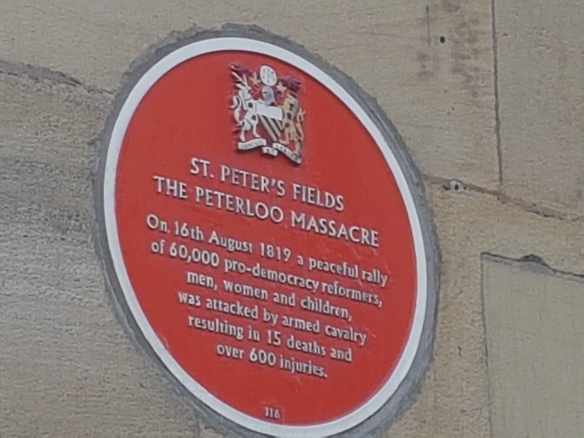 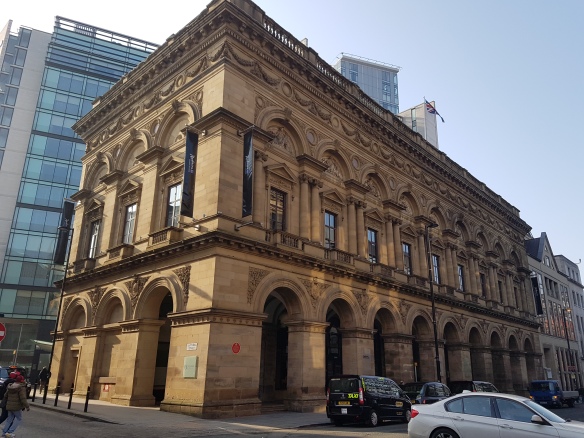 Talking of hotel rooms, for decadent cats there is always the magnificent sight of the Manchester Midland Hotel. The Edwardian Baroque Grade II listed building was erected in 1903 facing St. Peter’s Square to serve the northern railway terminal. Interestingly enough, the true frontage faced the square, with the rear of the hotel facing the station! However, even the side street facade was adorned with the same elegant detail, including direct access to the Spa and hairdressers. 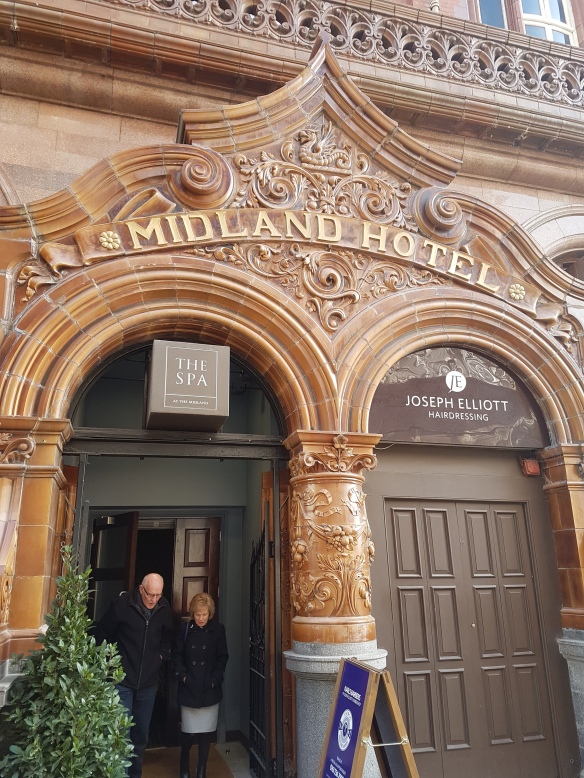 If you’re looking for insurance against the mind-numbing advancement of bland architectural fashions, look no further than the corner of Oxford Road and Whitworth Street. It used to be the iconic Refuge Building in my day, but no less magnificent is now the Principal… a Grade II listed building constructed in the latter part of the 19th century, and housing an early example of the importance of financing public welfare through life insurance and pensions. It has more recently become the home of the Palace Hotel… well a great conglomeration of architectural gems needs beds for the volume of visitors to be accommodated!

Did you think I would ignore the needs of the administration cats amongst you? Manchester Town Hall on Albert Square is a Victorian neo-gothic building completed in 1877. And the old Queen even reflected her love for a pre-Brexit German union with the formidable Albert Memorial, whereby the pillar of teutonic heartthrobness faces the great home of Manchester City Council many years after his untimely demise. A Grade I listed building, this centrepiece of Manchester is considered one of the best examples of Gothic revival architecture in the world. In the 1930’s an extension was built and connected by two covered bridges. 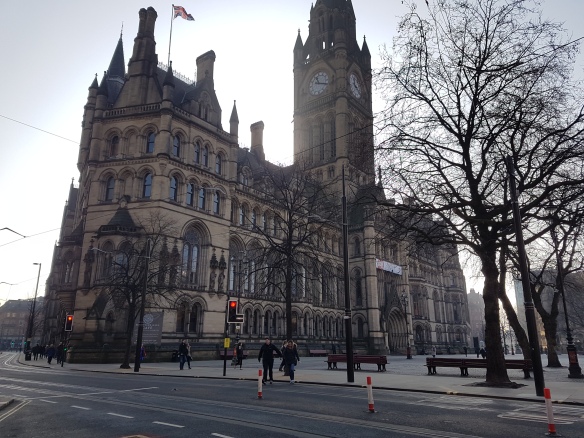 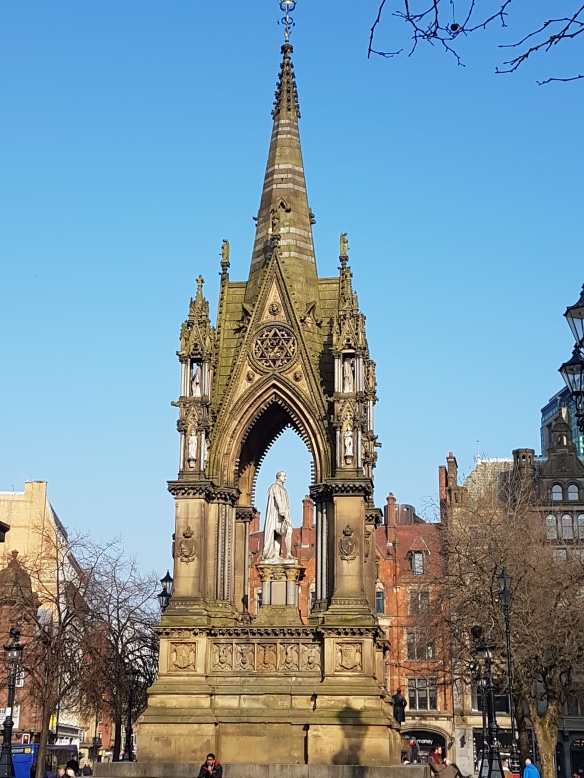 But when visiting such architectural beauty don’t be blinded by the overall majesty of the building, look for the detail, as there is a history to be read by looking at the ornate representations just above the natural eye-line…

For spiritual cats there is always the Friend’s Meeting House on Mount Street. Built in 1828 this has been the home for the Quaker community, and provides a venue for all forms of action towards social and economic justice, including providing shelter for homeless asylum seekers during cold winter months.

The aforementioned Whitworth Street is always worth a stroll, if only to experience a canyon of former late 19th century industrial warehouses, now largely converted into apartments. Here names such as India House and China House reference Manchester’s original connection to the wider world of industry and commerce. 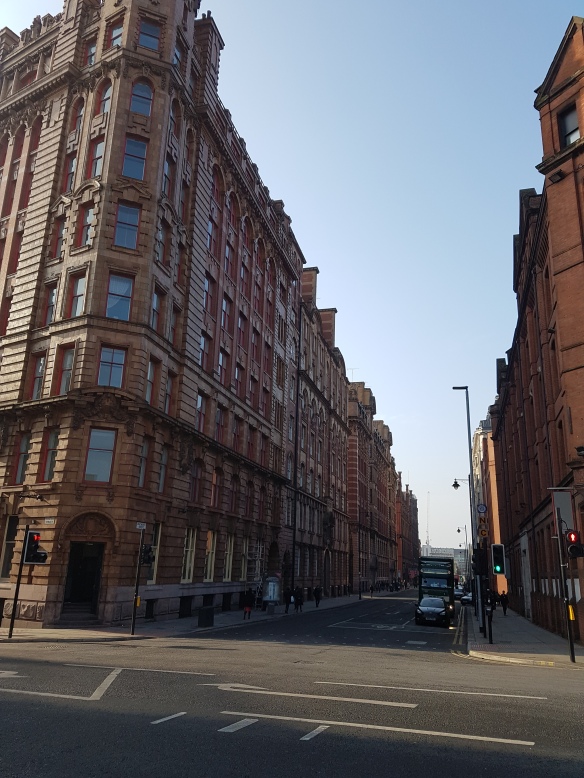 Look up when strolling along King Street and you might just take in the motto of ‘upward and onward’ as Doric columns support an image of advancement. Here lies Manchester’s first town hall, a seat of administration from the early 1820’s until the present day structure opened in 1877 at Albert Square, when the demands of a burgeoning bureaucracy required a larger home.

As time passes the old must inevitably give way to the new, but is it always a gracious transition? The Chinese influence will take on greater significance as the 21st century progresses (i.e. not just affecting our palate!)…

The new must occupy space alongside the old… well, at least until the new gets condemned or simply falls down, leaving the aesthetic champions to once again dominate the picture. But here a number of new buildings offer some startling contrast to the historic core of the city…

Then there is the confusion of the old and the new, as trams re-occupy the street as the best mode of transport. Blackpool may be home to the longest consistently running tram, but Swansea to Mumbles in south Wales was home to the very first tram. In recent decades Manchester was again at the forefront of adopting the form as its primary means of transporting the masses around the centre of the city…

So, Manchester has a historical core to match the best of them, and a willingness to showcase its history in splendid fashion. Did you spot that pub? Until we speak again, take Bella’s lead and become an inquisitive cat.