Juno was often known to occupy her strategic position while she pondered the meaning of life in her adopted home of Cardiff. As summertime struggles to make itself known the reflection currently coming to mind is that ‘life is a beach‘, or so they say (I think that needs to be deciphered in some sort of southern European accent for the meaning to be realised!).

But a beach is surely a design of nature… or is it? Not for the first time, strange things are happening in the city of Cardiff! Beware men at work, particularly as the kids school holidays are arriving imminently:

The phenomenon of the ‘pop-up shop’ or ‘pop-up street food gig’ now seems to have crossed the divide from the artificial world of commerce to the natural world.

Nature may have taken thousands of years to erode rock formations in order to create beaches along our shorelines, but in the commercial world what’s a week between glances at the balance sheet?

Then as the sun rises on an opening day, no sooner can you utter the most fashionable of terms in the commercial lexicon… transformation… while adding that most crucial of money generating ingredients… people; hey presto, you have a playground for cats both local and from far away…

Does the lapping of the shore against the beach make a noise if nobody is there to hear it? Who knows, or even cares! Where there is fun to be had, with the occasional tug on the purse strings, there will always be the sounds of the beach to be heard at strategic times of the year in the face of the old dockland.

Until we speak again I’m sure Juno would wish that all of your beaches be bathed in sun and filled with smiles.

I love summer. Nothing better than stretching out in front of the french windows… if only the sun would stop moving around to different parts of the flat! It just means I have to take the trouble to move a few feet every couple of hours. If only my personal groomer had listened to me when we were moving from London to Cardiff. I said we should get a flat that revolves with the movement of the sun, so I could identify my prime spot and let the real estate do all the hard work.

Anyway, enough of being right. The good news is that the sun has arrived today, and seems set to stick around for a while. What’s more, it actually shines in Cardiff, not just in London. I wasn’t sure they would have the same sun over here in the west, but I happily accept these bonus features that come with the move. Talking of happiness… my personal groomer seems to have made some contact with someone who knows what she is talking about, through some blog weekend or another back in the old country (London, that is). I liked reading a recent post that linked our feelings of happiness to these periods of sunshine. See the link at http://thehappinessexperiment.co.uk/sun-people-happiness/

The Happiness Experiment is something you all should be getting into; take it from me, this happiness thing works, as long as you have the right staff to deal with all the other stuff. That reminds me, my personal groomer seemed to make contact with a number of good people at The Gentle Author’s masterclass workshop. Thanks to Beata for reminding us all of the true saying “Dogs have owners, cats have staff”! 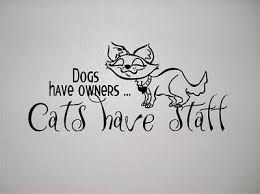 I digress, but all for your personal education. Back to summer in the city. I see that this Cardiff place looks quite good in the sunshine. Here is it’s Manhattan look:

And then there is the leisurely looking bay area for all of you who like to stroll by the water and get a refreshing drink and bite to eat:

Talking about a bite to eat, I think I had better leave you all now and remind my personal chef to ignore the bag of biscuits and get those swans in the oven. See you again soon, Juno