Juno was often known to occupy her strategic position while she pondered the meaning of life in her adopted home of Cardiff. As summertime struggles to make itself known the reflection currently coming to mind is that ‘life is a beach‘, or so they say (I think that needs to be deciphered in some sort of southern European accent for the meaning to be realised!).

But a beach is surely a design of nature… or is it? Not for the first time, strange things are happening in the city of Cardiff! Beware men at work, particularly as the kids school holidays are arriving imminently: 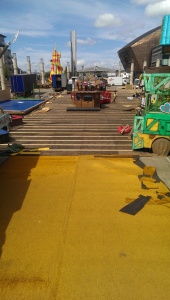 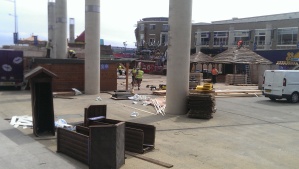 The phenomenon of the ‘pop-up shop’ or ‘pop-up street food gig’ now seems to have crossed the divide from the artificial world of commerce to the natural world.

Nature may have taken thousands of years to erode rock formations in order to create beaches along our shorelines, but in the commercial world what’s a week between glances at the balance sheet?

Then as the sun rises on an opening day, no sooner can you utter the most fashionable of terms in the commercial lexicon… transformation… while adding that most crucial of money generating ingredients… people; hey presto, you have a playground for cats both local and from far away… 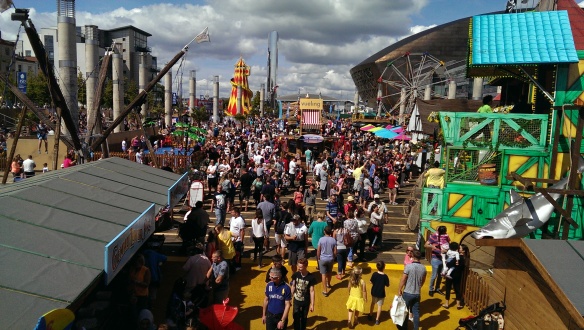 Does the lapping of the shore against the beach make a noise if nobody is there to hear it? Who knows, or even cares! Where there is fun to be had, with the occasional tug on the purse strings, there will always be the sounds of the beach to be heard at strategic times of the year in the face of the old dockland. 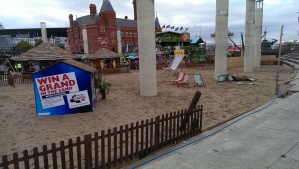 Until we speak again I’m sure Juno would wish that all of your beaches be bathed in sun and filled with smiles.