My resident ‘exaggerator general‘ is talking up the enormity of today’s encounter at the Cardiff City Stadium, but I can barely raise a paw from my eyes at the prospect of the Battle of the Basement, as the Premier League’s two worst teams go head-to-head in the rush to relegation. With the two worst defensive records, and two of the worst scoring records I await nothing short of a comedy of errors to be reported back to me after the match from the ‘gullible one‘, who has even gone as far as to renew a season ticket. I am secretly trying not to offer congratulations for grabbing a bargain, as relegation means 4 extra games for the same price… I must keep remembering it is so easy to mock the afflicted!

I hear they are extending the capacity of the stadium, yet one glimpse into my food bowl of fortune tells me that the crowds will be hard to come by… 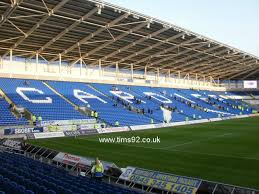 If you are into gambling I suggest you should have more confidence in a four-month long Welsh heatwave starting today, with record temperatures in the upper 30 degrees, than the arrival of Fulham FC sparking any heat into this encounter. Even with their tradition of the comedian Tommy Trinder being a life long fan (and former club Chairman) there is nothing in their recent history to suggest Fulham are going to raise the spirits… 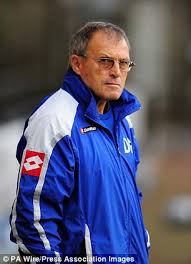 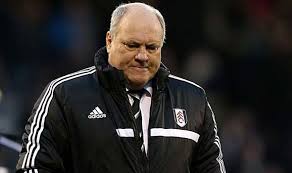 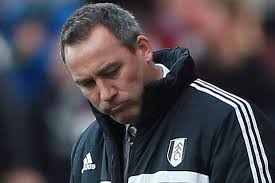 One look at their line-up of managers so far this season does little to tempt me to roll over for a tummy tickle! I thought I heared something on the radio about ‘Felix the Cat’ being this week’s manager at Fulham Football Club, but my ‘fount of all things unnecessary‘ tells me it is a German guy called Felix Magath. Oh well, football is a strange game, so I am told. But, whoever came up with that one hasn’t watched cricket, I say! 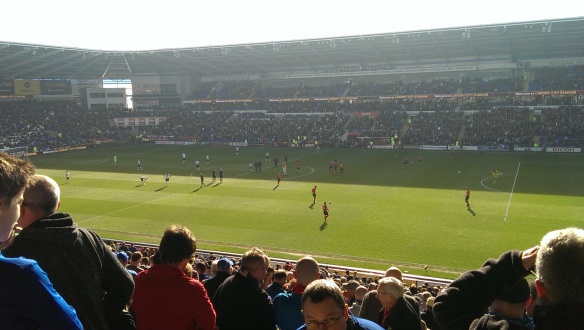 It’s 3.00p.m. on a sunny Saturday at the Cardiff City Stadium, with all the home fans desperately hoping some of those rays inspire a long lost performance out of their team. Get strapped in, this could be a roller-coaster of a yawn; 90 minutes can be a long time when you are stuck in a seat watching loads of blades of grass grow.

Much running and sliding, and general kicking about goes on for 45 minutes. As expected of the two teams propping up all of the others, little resembling a chance of goal scoring is happening. 0-0 as the half-time whistle approaches, but one further minute of added time comes up on the stadium big screens. Many of the home fans are wondering what a goal is… it is reaching a point where they begin to claim to have heard about them but not seen their team score one for so long… “days of the dinosaurs” may even get muttered in the same sentance as the last Cardiff City goal. But then, with the last kick of the half (and many fans already queueing for their exorbitantly priced tat passing as refreshment beneath the stands) up steps Captain Caulker to slot home from a few yards out. The mystery of the Cardiff City Stadium goal is banished as the home team go off the pitch to the applause of their fans… Cardiff City 1 Fulham 0. A cat’s eye view of the goal (with thanks to Mail Online):

Dare the locals dream… the second half is about to kick-off in this game where it is widely acknowledged that the loser is likely to be doomed to relegation.

The half begins with more of the same fare experienced for most of the earlier 45 minutes. Not exactly igniting the passions, and then the inevitable happens as the home team go on the retreat, against the demands of some of their baying fans, and Fulham score to level the match at 1-1. Deep from the inevitable footballing cliche machine comes the murmuring of the stadium sages… “a draw helps neither team”. But, uncharacteristically for this field of dreams, a 12 minute spell of productive activity ensues, and with the help of Captain Caulker again, and a comedy of errors in the Fulham defence, Cardiff City find themselves in uncharted Premier League waters at 3-1 to the good.

Anything could now be possible in the weirdly distorted mind of my ‘biased reporter‘; “don’t be so stupid, this is Cardiff City, not Barcelona” I suggest. And, with a cat’s level of footballing knowledge, I take a bow for my superiority in all matters. Whatever the fans shout, this is Cardiff in the Premier League, and they just can’t help themselves… they have this strange habit of running backwards, making even poor or mediocre teams like Fulham (or Sunderland, Norwich, and West Bromwich Albion) to temporarily look good! This is clearly a team that defy all logic. If playing an attacking style pressing forward puts you into a 3-1 lead, what genius has told them that they should now all run backwards and play just back in their own half? You don’t need a degree in mathematics or statistics to read the league table and see this is a team who manifestly fail at trying to defend a lead.

Mesmerising, majestic, out-of-this-world, scintillating… these are all words overly used in football descriptions, but today you will have to be somewhere else to find them. However short on superlatives, those rays of sunshine do manage to bathe the home crowd with something more than just luck… for today they are playing Fulham, a team even more inept at putting the ball in the back of the net than the home team. The final whistle arrives to bring the curtain down on a score to lift Welsh hearts… Cardiff City Bluebirds 3 Fulham Lame Ducks 1.

I guess I will have to listen to ‘exaggerator general‘ pontificating about hope, and a bright new horizon, while I resist the temptation to spike the balloon with a reality check. If Felix the Cat is still in a job next season, in a club that have taken the term ‘Manager of the Month‘ to a newly ridiculous level, will he be seen in these parts again? Until we speak again I am going to be a sun-seeking Juno, trying to avoid casting around the dark clouds that still engulf a team saddled with a clueless owner… 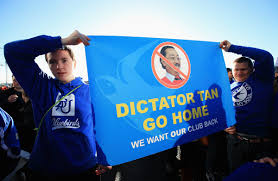 … with an over developed sense of self-importance.

[Most of the images are borrowed from Google images to illustrate the story, with thanks to those who posted them originally].