My slumbers are being disturbed daily by the incredible on-going story of the missing Malaysian Airlines plane MH370. Not least by the ability of so many people to create so many stories out of so little information. As the scale of the search grows ever wider I decided I should add my own surveillance skills to the effort…

I was particularly distressed by the idea of suicide by pilot, with widespread reporting of two previous cases back in the late 1990’s. So much so, that I thought I would submit my own script of events before Hollywood churned out their inevitable take on the story. So, put aside all of your conspiracy theories, because this is how I think things have played out.

As a plot developer I am going with the idea that the pilot or co-pilot had decided on suicide by crashing the plane, and had over-powered their colleague in the cockpit shortly into the routine flight. It is widely reported that a ‘ping’ was being transmitted for about 6 hours after the communications systems had been disabled; and the plane is thought to have changed course to a northern or southern corridor taking it either towards India or into the Indian Ocean. My preferred theory is the southern route out over the ocean, until the plane runs out of fuel and plunges into the water.

However, there is a stranger twist to this altogether strange affair. How could the perpetrator have guessed that they would be plunging into a massive ocean at the exact position that Bruce Willis had rowed his fishing boat out to? What are the chances that the only man in the world who could single-handedly catch a jet plane and hold it completely intact as it entered the water and continued down into the murky depths would be in that exact same place? 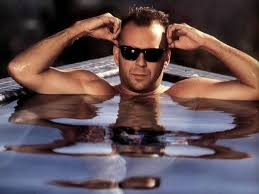 But at this point in the story things start to get a little odd… as Bruce and the plane plumb knew depths (go on, you never thought he could did you?) a pinpoint of light appears on the distant ocean floor. Could it be the coin Bruce had recently flipped to see if he was going to have a successful day fishing? Probably not. There again, it could be a wedding ring tossed overboard from a passing cruise liner as the result of a domestic tiff. Probably not.

No, as it turns out there was a simpler explanation… much to Bruce’s amazement (go on, you never thought he could be amazed did you?) it was the glint in George Clooney‘s eye, as he stood on the threshold of the lost city of Atlantis. 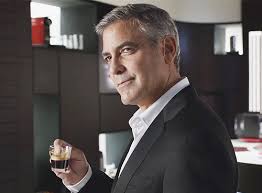 In his own special way George extended a warm welcome and a cup of coffee to the bemused but somewhat relieved passengers. Bruce declined, as he preferred tea. George had personally discovered, at no cost to his reputation, an ethically sound and sustainably resourced new world… and as there was no wi fi, internet access or mobile phone signals everyone lived happily ever after. Well, that’s Hollywood for you.

I intend to donate all the proceeds from the film to the families of those who were on MH370. In the unlikely event that my vision of what happened doesn’t turn out to be completely accurate I advise you all to revisit your conspiracy theories. But don’t let your Bruce-induced nightmares keep you awake.

Until I discover a cure for dementia, and we speak again, I am going to be an extra vigilant Juno.

[With special thanks to those who placed Bruce & George pics on Google images that helped illustrate this tale (or should that be tail?)].