Have you heard the one about David and Goliath? If you haven’t, just ask Zac Goldsmith. Anyone remember Zac? He’s the rich boy, former Tory politician who came up against the son of a Muslim bus driver, or so we were constantly told.

Well, so-called smart guy Zac didn’t exactly display many smarts in his campaign to become Mayor of London; deciding to follow some ill-conceived advice about pitching a mendacious focus on racism that completely back-fired. Mr Khan played the clever game, and is now the much liked Mayor of London. Go for it, Sadiq!

Well, dear silver spooned Mr G. then decides to play the ‘resignation on principle’ card. Playing to the favours of his super-rich constituents in a very leafy part of south-west London in order to be returned to parliament as an independent (aka a Tory in an ill-fitting disguise) . On this occasion the Tory wealth machine complacently came up against a Lib-Dem (who are they again?) woman, Sarah Olney (about as high profile as her political party these days). Sarah and the L-D’s play a canny game, and guess what? Yes, she is returned as the surprise new MP for Richmond Park.

Juno wasn’t exactly backward in coming forward with the canny game. Here she plays the half-cat-half-door routine to lull unsuspecting goliath’s into her trap…

So, what has this got to do with anything, you ask? Well, just last night we had the appetising spectacle of a bluebird coming up against a wolf.

No contest, you shout! Well, just ask Zac Goldsmith about no contests. Certainly before the game started there was a moment (see the two opposing players nearest the camera) where the essentially dog routine of sniffing arses looked about to break out in a public place… 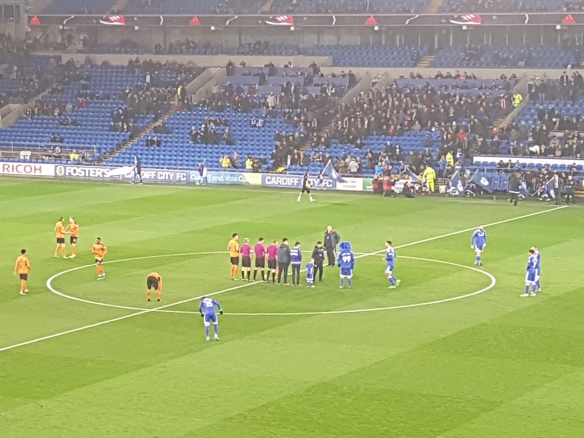 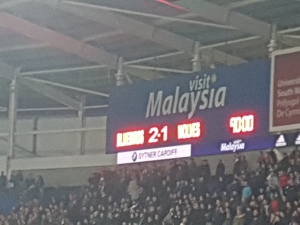 Two minutes into the match, and a thunderous strike from the wolf leaves the bluebird reeling… the obvious outcome of such inequality is only a matter of time. But, canny games are afoot, as the home team contrive to imitate a bunch of turkeys in search of a christmas oven. When David Coleman described football as a game of two halves, he was clearly clairvoyant with a futuristic view of this match. Two second half strikes from the Bluebirds and they put the canny in the can.

Until we speak again, for the record the final score on the hazy scoreboard represents Cardiff City (Bluebirds) 2 Wolverhampton Wanderers (Wolves) 1.