My ‘Resident DJ’ is gazing at the old vinyl collection and reminiscing about something or another. ” What’s new pussycat, Pussycat Dolls, Stray Cat Strut, Cat Power, Cat on a hot tin roof” I helpfully suggest; but ‘Nostalgia Freak’ is not impressed, and mutters something about me being deported back to England if I don’t develop some musical respect. 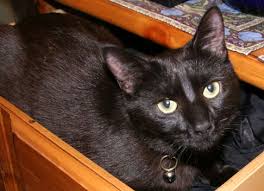 Oops, time to hide…  “Year of the cat, Cats in the cradle…” I proffer from my new-found bolt-hole. ‘Now your’e getting nearer’ I hear.

It seems that Cardiff is home to the oldest record shop in the world. It has been 119 years since Henry Spiller began selling shellac phonographic discs from a little shop in the long since disappeared [original] Queen’s Arcade. In true Dr. Who style (a newer Cardiff legend), the shop’s second incarnation from the 1940s coincided with vinyl becoming king; and with a new century seeing the CD struggle against downloads it has more recently moved to its third home in the Morgan Arcade.

Step into this old emporium of the different formats and it still brings back many fond memories as well as great music to all lovers of a good tune. Everyone who knows Spillers Records are likely to have their own definitive year; something about their personal musical era, or the first time they visited the little shop of big expectations. For the ‘Native Old Git’ it seems 1972 was the year… with record player barely a year old, and a few albums bought in a subterranean part of Woolworths on Queen Street, it was time to enter the dark world of the music shop on The Hayes. I am reliably informed that John Kongos became that first purchase, shortly followed by a couple of albums by The Who, and the changing musical directions from Stevie Wonder. Alas, these uplifting reflections are tempered by a flickering thought of the loss of the other album purchased in Spillers that year, but subsequently lost in the intervening years of travelling.

Hmmm… this John Kongos guy looks a bit like a cat, but I am a bit wary of meandering around someone who says He’s gonna step on you again!  At least Stevie Wonder knows how to cheer a sun worshipping cat up.

As for The Who, I am left wondering what there is to do in Leeds… apart from leaving their mark on the concrete column. Their songs about Young Man Blues and Teenage Wasteland suggest they should try somewhere else. Cardiff comes to mind…

Back in 1972 vinyl wasn’t ‘cool’, vinyl was ‘everything’. It is hard to believe that this venerable institution was already 78 years old at the time ‘Nostalgia Junior’ was ready to spend the hard earned (by somebody else) pocket money. Then again, apparently not; we are talking about a time when smoking was still a widespread profession rather than the Public Enemy No 1 badge of today, and most places had a darker dingier feel to them… and Spillers on The Hayes was no different. This second incarnation of Henry’s gift had already absorbed 25 years or more of people loitering and browsing with intent; of passionate staff and inquisitive punters engaged in musical inspection and introspection.

Unlike any other music selling joint of the time, this was a place where you could even disappear into a private booth to listen to a few tracks before deciding on what to give the cash up for. That first album personally bought in Spillers was known for its couple of previously released singles, but what of the rest? In the claustrophobic atmosphere of that booth John Kongos sang of nostalgia, and the deal was sealed. This was no place or time for absence of thought and rash musical whims. After all, when you walked out of this place and set off around town, your vinyl album under your arm said something about who you are; it would become part of your teenage peacock-like display. CDs slipped into pockets or bags project nothing, and as for downloads… beam me up Scotty. 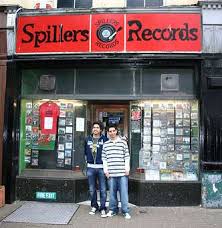 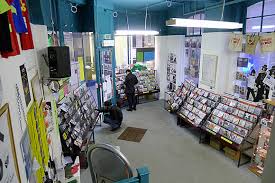 It’s another world we live in, compared with 1972, but today Spillers became the ‘Old Git’s’ destination for the first time in 30 years… there was unfinished business, a long lost album to be rediscovered. The shock of the airy brightness soon recedes as the same old Spillers values of love for music becomes clearly evident on the racks and in the banter between staff and visitors. It’s nowhere to be seen in the CD racks on the ground floor; but what’s this new invention… a smaller upstairs room housing the vinyl… could it come to the rescue? Still no sign of the elusive lost album, until without hesitation the welcoming staff immediately offer to order it. With three additional live tracks, my ‘Native Bottler’ throws nostalgia to the wind and orders the remastered CD version, and in a few days I am promised the treat of Santana Abraxas providing the soundtrack to my universe. At least it isn’t the download version, God knows where I would have to plug something in to listen to that!

It seems that The Oldest Record Shop in the World keeps the fire going for those who love their music, but it is more than a collection of hardware, I am reliably informed this place is a purveyor of memories, a definer of ages, a repository of personal histories. I have been Juno, and until we meet again it looks like I am going to be transported back to the early 1970s.