It always starts with my staff being wrong and me being right, but each time I need to manage the situation as if we are trying to avert some full blown diplomatic incident. On this occasion it was simply triggered when I looked at my nearly full bowl of food and just happened to throw a glance of expectation to my personal chef, all the while thinking ‘are you seriously expecting me to eat this stuff?’ I usually start with the cute look, something like ‘look, no eyes’:

Much to my amazement, on this occasion they say ‘your bowl is full and your not getting anything else until you are eating what is already there.’ Now, I don’t know about you, but for me the recipe for a stand-off has just been triggered… the question is: how to play these deluded humans along, so they think they have made a point, while I still win. At this stage cute is too easy  on them, it is time to try a bit of cunning, and also offer the threat of a right hook to show I mean business: 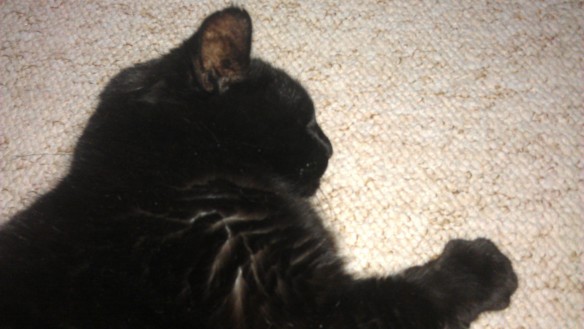 The first tactic is what is commonly known as the snub… I deliberately brush against their legs, and just as they are bending down to stroke my head I walk away a few paces and throw the disgruntled look:

This is designed to deliver a psychological blow to the snubbee; but to my surprise they step back and look at me in some kind of accusing way… is this the counter-snub in play I wonder?
I could respond by walking further away, but that could easily be interpreted as the sulk, and sulking would be a surefire admission of defeat. How do I retaliate in this situation? I remind myself that inevitably there can only be one winner here, we can’t have humans thinking they are in control.
The second tactic, to escalate from the snub, is what we call the break from protocol; so I jump up onto the coffee table and deliberately sprawl out across the newspaper. This will show them who is boss around here. But once again, to my utter amazement they reply with the unprecedented break from protocol by trying to shoo me off the coffee table… shoo?… me? what’s going on?
By this stage I had calculated on receiving some gentle strokes, but instead I believe the situation has reached the level of an affront. However, the intensity of the atmosphere deepens as my accuser replies to my affront with their declaration of an outrage. I do what any self-respecting cool cat would do in this situation, and adopt the frosty look:

It seems that what started out as a difference of opinion has now become a full blown incident. I slump to the ground on my side and flex my claws, to which the now disgruntled human retrieves the claw-clippers from the dark mysterious cupboard that I am not allowed in… sabres are being rattled!
Clearly different tactics are required in order for me to regain the upper hand. If the first line of cute did’t work it is time to put the second level of cute into practice… I lie on my back with legs in the air as the offer of the olive branch.

At first, the indignant one seems to rebuff my olive branch; but once it is accepted with a tummy stroke it is time I went to the next tactic of putting out feelers. Perhaps if I dazzle them with my x-ray eyes it might just win them over:

At this stage I purr loudly for effect, and they respond with the suggestion that poached salmon is on their menu… and I might just get some for a treat. This is their way of making the necessary overtures.
At this delicate stage the diplomatic thaw is under way, and I resist from reminding them that I am clearly winning. It is necessary to maintain the thaw until the salmon has been delivered and consumed… at which point I will be ready to start the next snub!
[This post has been developed around a column in the Observer newspaper written by Raphael Behr on 11th August 2013].