Ok, before the health and safety ayatollahs get onto me, I am not really going to use the sand of the new artificial beach down at Cardiff Bay as a litter tray (at least not during the day!). But it did come as surprise to me as I was strutting around the bay to suddenly be confronted by a mix of sand, water, funfair rides and the usual trappings of a bona fide beach where there used to be an open space in front of the Millenium Centre. It seems Cardiff is not the first, as European cities as well as London, Liverpool, Nottingham and Birmingham have already stumbled upon similar ideas… though I never thought of a day by the beach when I was in East or South-East London.

Well, I suppose if the United Arab Emirates can build cities in the desert, then why shouldn’t Cardiff bring sand to the city? If I was being ungenerous, I might suggest a sand-pit has been placed next to a paddling pool. But judging from the crowds, and other good reviews, this seems like a great idea that should become an annual event: 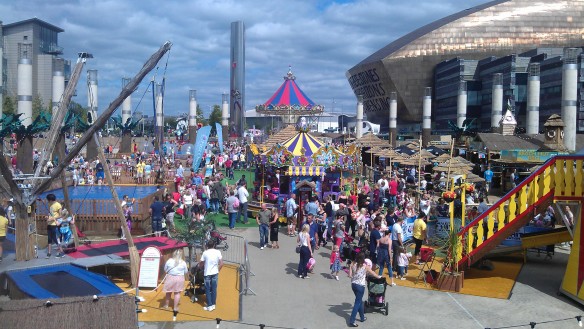 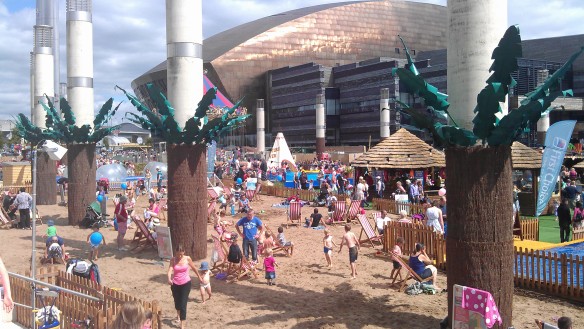 Get those handkerchiefs knotted at the four corners, get the trouser legs rolled up, there is a deck chair with your name on it if you beat the crowds… well it isn’t quite St.Tropez yet. We even have another British summer quirk to set the right scene… a ‘scorchio’ of a July with temperatures into the 30’s bode well for a summer at the beach, but no sooner does the attraction open on 27th July (until 1st September) and we get clouds, lower temperatures and showers! Still, pack your shades and brollies, beachwear and plastic macs; its time to do what the Brits do best, and stoically hope that your few hours on the sand will be the few that get the sun. 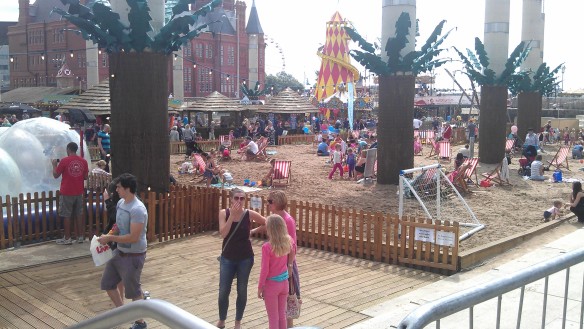 It doesn’t seem to have dampened too many spirits so far… and as I was strolling under the boardwalk I reflected back on days spent up the pool, to times spent on the dunes, and like a stranger on the shore there was nothing quite like being on the beach. I have been Juno your bayside DJ, see you again soon.

1 thought on “Great place for a litter tray”