You might think it is cool that us cats spend around 20 hours a day sleeping, but I for one pride myself on being fully alert to all that is going on in my local environment. Personally, I like to sleep with one eye open, so I can be instantly aware of the slightest stirring of any nocturnal creatures. During the day I sleep with the other eye open, so I can be aware of any potential food sources that busy themselves around the crack of lunch.

Understanding your local territory becomes essential for us warrior types. So you can imagine my surprise when I recently toured my adopted home city, only to find the strangest of happenings had occurred. I was first alerted to a potential catastrophe when I found a giant javelin had pierced the paving stones just outside of the central library, miles away from any athletics stadium.

I wouldn’t want to tangle with whoever threw that! But wait, it is not just something that one person could have caused… a force of nature had even bent all of the lamp-posts over:

As I turned another corner a tragic sight presented itself, and reminded me of the golden rule: when the going gets tough, let go! Unfortunately, this poor soul couldn’t have had time to react to whatever had struck the city with awesome force:

I realised that local industries must have been decimated by something other than greedy owners, politicians and economists, as bits of shovels, axles and buckets lay where they landed in the most incongruous of places:

But perhaps most surprising of all

was my thought that every anchor needs a boat (even though I am originally from East London that isn’t rhyming slang for anything)… was this the clue I was looking for as to what had happened, could it be something to do with the power of the sea, and if so what has become of the Cardiff Bay barrage? 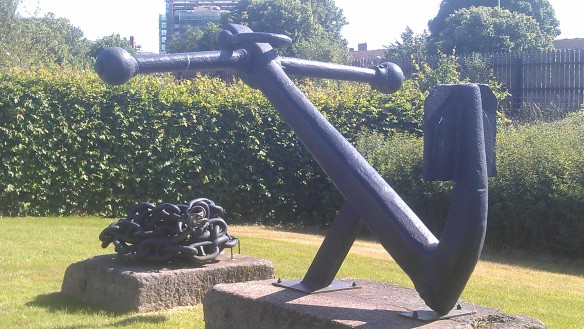 In Cardiff you don’t see boats like you used to, but when you do they seem to be in the strangest of places, or was this another result of whatever had befallen the city while everyone was asleep:

I can only explain these strange happenings around the streets as being caused by some freak meteorological event… it is my conclusion that we have unwittingly experienced Hurricane ‘Diff. But before we seek the twinning of this fine city with that of New Orleans lets keep a sense of proportion, and be wise to any other explanation… it could be the first wave of an alien invasion in search of intelligent life, which is why they arrived in Cardiff, not in Swansea!

The good people of Cardiff should be assured that, to my knowledge, the only casualty seems to be the one who forgot to let go of their rope. All you other less fortunate readers (who don’t live in Cardiff) should also be assured that no animals or children were consumed in this story (unfortunately), so you can come visit the city without any fears.

To see more images of Cardiff street sculpture click on the link. None of my staff were referred to in this post as I have given them an hour off. See you again soon. Juno