[aka Fucking with your mind!]

Be confused… be very confused! If you were brought up on the myths and legends of a corner of Cardiff known as Tiger Bay, then the latest extension of the 21st century docklands redevelopment will mess with whatever is left of your functioning brain cells. After air-brushing a major part of local history out of the picture for a few decades, the latest in local bureaucratic administrative hype is set to house, employ and entertain you. Put your hands together and welcome the vision that is Porth Teigr! 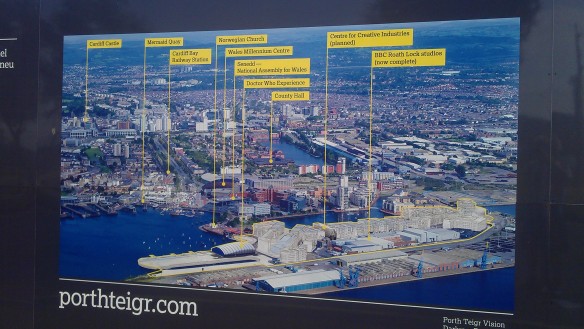 Whatever that is… because what is emerging out of the primordial slime of Roath Basin bears no relationship to the proud badge of Tiger Bay; and it isn’t even in the same place as the original! Not that the location of the original has anything of architectural merit to draw the attention of the discerning student of urban mythology… the southernmost boundaries of the original, relatively small Tiger Bay area, is demarcated by some prime examples of skyline blight, which actually looks even more attractive than the low level flats and houses that hold many of the original street names… 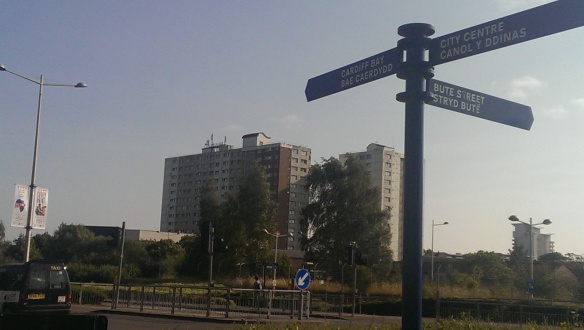 ‘Porth‘ is Welsh for ‘gate’… so in modern parlance are we supposed to have created a misdemeanour on such a scale that it becomes ‘Tiger Gate‘? Well, if you look at the blandness of the 1960’s architectural replacement for the previous Victorian ‘slums’, perhaps we have. Social engineering had become a slight of hand for so-called urban redevelopment… a destruction of world renowned character makes way for the monumental achievement of bland mediocrity.

Why are we so reluctant to celebrate our gritty historical reality when it doesn’t conform to the textbook presentation of swords and sandals, or castles and stately homes? Here we have the site of the very first multicultural society in the UK, built on the necessity of world trade, and testimony to the power of the melting pot to bring people together in local harmony. Heaven forbid that we might put the cost of demolition and reconstruction into refurbishment of what already exists. Or perhaps the forbears of the Ukip tendency were subtly at work, with a long-sighted determinism to break up any thriving community based largely on immigration. It becomes less easy to blame it on the immigrants if we have the tangible evidence of their hard-working contribution to our financial and cultural wealth.

As a cat who originates from London but was duped into relocating into the old docklands of Cardiff I am intrigued by all this Tiger-stuff, and hope to bring you more of the true history of this historical and cultural landmark. Until we speak again I have been ‘Immigrant Juno’, scrounging off my native ‘repatriated refugee’, and contributing mainly through my litter tray!