[A number of pictures have been retrieved from google images, and I offer my thanks to all the cool cats who have created and shared them]

After the recent visit of the Black Cats I am once again left conflicted with this football tribal allegiance thing… the arrival of West Ham United tugs on my coat. It’s a reminiscence thing taking me back to the kitten years, as I emerged this wonderful in the less than salubrious Republic of Newham in East London. My more recent elevation to Cardiff via a brief sojourn in Blackheath even began in a cat sanctuary down the road from West Ham’s Old Boleyn ground. I must admit I fell off my throne laughing when I heard that they are about to move into the Olympic Stadium… that’s a triumph of ambition over ability if I have ever heard of one. 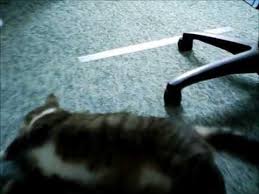 Should I be supporting the ‘Hammers‘ on their brief trip into foreign territory? The question soon fades into obscurity when my ‘in-house sports correspondent‘ tells me the home team really did dispense with the Malky god-like character, but have replaced him with a Norwegian Gunnar. 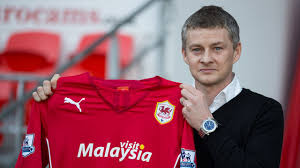 Compatriots of my superior species are quick to remind me of the power of the gun over the hammer: 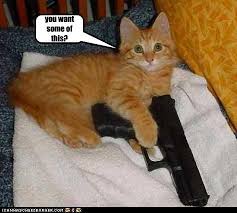 What’s more these hammers seem to be arriving in wilting rubber mallet mode, having lost 5-0 & 6-0 in the last week:

My resident ‘wishful thinker‘ tells me that things come in 3’s. Yes, I say, you have had one very good manager sacked, only two to go! As long as Looney Tunes remains the dominant soundtrack at the Cardiff City Stadium it will be difficult for the home fans to build confidence through a triumph of hope over nut-job-ery.

It is 3.00p.m. on a sunny January Saturday afternoon, and the Ole’s armoury are setting their sights on any old East London iron (the hammers are also known as the ‘ironsiders). However, it seems that 11 home team players haven’t read the script, as they set about a recently familiar trait of not bothering to turn up for the first 45 minutes… a peculiarly Welsh trait shared with the national rugby team, only their illustrious rugby counterparts have a track record of barnstorming second half success not yet learned by these naive Purple Dragonbirds. After a long delay through serious injury to one of the bubble-blowers (West Ham fans never tire of singing ‘I’m forever blowing bubbles’… though I am not aware of bubbles’s thoughts on the matter!), their average but dominating team score. The home team play a familiar laid-back game with slow passing and often beating an ignominious retreat when they should be pressing forward in attack.

Half-time arrives 10 minutes later than planned to resounding boos from home fans. Cardiff City 0 – 1 West Ham United. Surely the second half must see something of a response for the long-suffering home fans.

True enough, the home side come out fighting, pushing for an equalising goal, and with 30 minutes still left to go they gain a dubious reward of seeing their opponents reduced to 10 men as their captain is sent off for a second yellow card (not a dubious decision, more a dubious idea of it being a reward). Over 30 minutes are played out with Cardiff almost entirely in the West Ham half and do at last get some shots on target, but nothing to trouble an average goal-keeper. Some urgency is injected by their oldest player on the pitch, but others still seem plagued by a need to play slow methodical passes around the pitch with little end product.

Those of you who know something about these types of matches will not be surprised to hear that West Ham had a solitary second half attempt on the Cardiff goal in time added on… and score! Cue a mass exodus by the home fans, with various comments along the line of ‘the ref is *&$%er’, ‘we was robbed’, and ‘it’s a mess’. In the words of the Coen Brothers (from No Country for Old Men) ‘if it isn’t a mess, it will do until the mess turns up‘.

For the record the final score is: 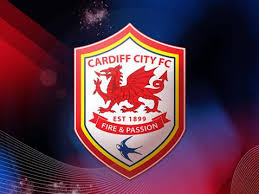 So, it transpires that the guns were largely silent, and the ‘iron‘ did enough to secure all the points without threatening to appear solid or imposing. As for my ‘heap of domestic despondency‘ there seems to be a triumph of reality over hope, as the local team have now managed to draw and then lose to a couple of the very few teams that were below them in the table. I dare to mention the ‘R’ word (relegation), but heads are bowed in dark contemplation. 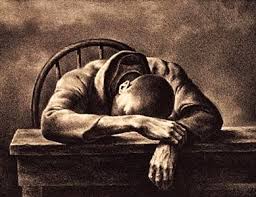 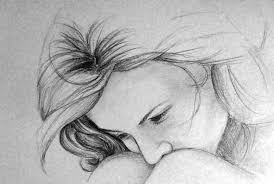 Until we speak again I am probably going to be ‘suicide watch’ Juno, and all belts and laces have been removed!.