So, the Oompa Loompa from Kuala Lumpur finally did what everyone knew was coming, and sent Malky Mackay home to count a few million quid pay-off before he gets snapped up by another club. As dark clouds descend on the servant quarters in the Juno household all I can hear are the sad eulogies for the great accomplishments of the departing Malky, interspersed with expletive-laden remonstrations against the ‘clueless son of satan‘ who is holding the world’s greatest club to ransom. One thing is for sure, football fans have very little sense of perspective when it comes to reflecting on their own team.

The first embarrassment of Malky and Cardiff City FC came when the owner sacked Iain Moody as the experienced head of recruitment, and replaced him with a 23-year old Kasakh work experience painter and decorator. I am unreliably informed that the home team and supporters may find yet another surprise from Kazakhstan managing them in today’s crunch match:

As for today’s game, the big question is what happens when you throw a bunch of black cats amongst the wounded bluebirds? 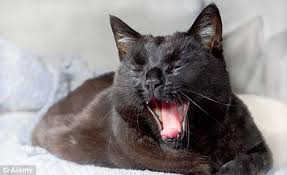 Sunderland FC have been known as the Black Cats since their 1997 move to their Stadium of Light home, with connections with such images over the last 200 years of history in the city. This can only cause conflict, huffs and recriminations in ‘Juno Central’; as I can sympathise with my ‘misguided servant-folk‘ and their persistence with lost causes, but I have to lend a roar to my kindred spirits.

History favours the Bluebirds… of 56 games Cardiff won 23, Sunderland won 19, with 14 draws. But history means nothing when the home team are in such disarray. The Black Cats are arriving on the back of ‘licking the toffee’ (and that is not a euphemism for anything, it is a surprise win away to Everton!). The Bluebirds are home again immediately after a ‘saintly slaying’, losing meekly to Southampton. My ‘resident lost cause‘ tries to suggest that current form counts for nothing, and the home team will raise their game in salute of the departing Malky Messiah, and in any case teams often win on the rebound to losing their manager, and in any case… blah, blah, blah!

With the locals in turmoil and the visitors in that unenviable ‘bottom of the table at christmas’ position this game has 0-0 bore draw written all over it in common footy parlance.

The Sky Sports dollar dictates that this match kicks off at 5.30p.m. and the home crowd are in full voice supporting their dear departed manager, as the team get into a bit of a huddle possibly still searching for the missing Malky.

It seems the locals have less to fear than most of the expert pundits predicted, as a dominant first half display against a poor Sunderland team is topped off with a Jordan Mutch goal. Half time arrives with the once again Mighty Bluebirds 1-0 to the good, but probably knowing they should be scoring more against this type of opposition.
Everyone knows this is a game of two halves (thanks again to David Coleman deceased for that gem of knowledge), and the teams await the second half with renewed instructions.

Sunderland temporarily appear to have turned up to the match early in the second half, only for a Fraizer Campbell goal in the 58th minute to set the Bluebirds chirping
towards a

desperately needed three points. However, football can often be a cruel game, and a team that should be building on its dominance suddenly turn into a bunch of headless chickens…

… sitting back defensively allowing Sunderland to attack at will, and even mystifyingly look like a good team for the last 20 minutes. Then to the home supporters astonishment the officials decide to reincarnate the former Old Trafford tradition of Fergie Time, as 5 minutes for added on time have been found carelessly lying around somewhere with nothing better to do than shred the nerves of Cardiff fans. Right on cue, but largely as a result of the home team’s new found levels of ineptitude, along comes an equalising goal for Sunderland, appropriately scored in the 95th minute. Away supporters delight at stealing a point from a game that should have long been out of their grasp, and the situation can only be described as a Black Cats 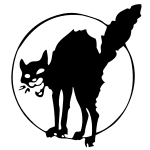 mauling of the Bluebirds…

My ‘resident heap of despondency’ returns home as if their team had lost the match, but no amount of purring from me is going to be seen as anything other than colluding with my kindred spirits snatch and grab job. Any thoughts of ‘kicking the cat’ are quickly met with the death eye threat… 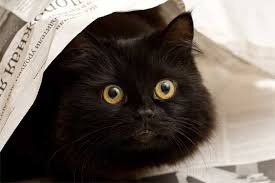 … and I intend to be an alert Juno until we speak again soon; and this black cat wishes you a happy new year, even if you are a Bluebird, or a Red Dragon, or even a Purple Dragonbird!