I seem to recall one George W Bush referring to many of the Eurasian countries as ‘the Stans’, which served well to demonstrate his expansive knowledge of world geography. While it came across to me as a simple way of grouping together totally separate countries, such as Pakistan, Afghanistan, Turkmenistan, Kyrgyzstan, Tajikistan and others, he was clearly overlooking his own backyard… Dumbfuckistan.

I mention this because, being a cat for a stat, I was completely blown away (excuse the advanced pun) by a couple of articles about life in the US recently. The first was all about my cuddly cousins, with an all out assault on our favourite pass-time of baiting and killing other dumb creatures. 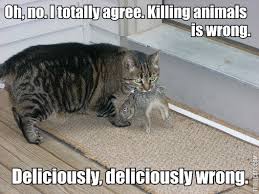 According to academic sources we kill ‘billions’ of other creatures in the US each year. Not to be outdone, we clock up millions each year in the UK apparently, though my resident protector of the environment doesn’t allow me to join in, I just get to exercise vivid imagination, particularly where ‘dwaugs’ are concerned……. 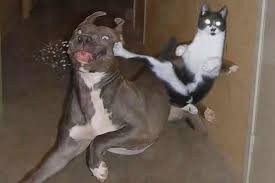 So, somehow we are the villains of the peace, when all we are trying to do is rid you lot of vermin and bring you warm gifts. At least we are doing our bit to keep researchers in jobs for obscure biology conservation institutes.

Did I mention ‘a couple’ of articles? Well it was the more recent one by Henry Porter in the Observer newspaper on 22nd September 2013 that had me nearly falling off my cushion… ‘American gun use is out of control. Shouldn’t the world intervene?‘

With all the uproar about cats killing other creatures it seems to me that we have nothing to learn from you folk; at least we rarely go around randomly killing each other. These stories from the US about yet another gun massacre is one thing, but when you see all the statistics lined up end-to-end it blows your brains out (sorry!).

Total number of Americans killed in all wars from Lexington 1775 up to Afghanistan today is officially recorded as 1,171,177. Total number of civilians killed by guns (including suicides) from the killing of Edward Kennedy in 1968 to today is 1,384,171. Almost a quarter of a million more in 45 years than in the last 238 years of warfare. And still they demand their rights to an outdated second amendment to keep and bears arms, drawn up in days when the wild west was in vogue and coffee (or is that corrfee?) came in only one option, hot and wet. 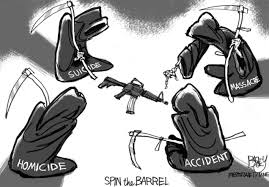 Henry Porter reminds us that since 9/11, when just under 3000 people died in that atrocity, there have been 20 terror-related deaths and 364,000 caused by privately owned firearms. Apparently, if the US witnessed that sort of carnage taking place in another country they would be hurtling down the United Nations by-pass on a mission to restore sanity, introduce democracy, and relieve the locals of their richer natural resources. For a nation notorious for its lack of passports and ambition for travel, perhaps the rest of us cats should be thankful… the less of their culture they export the better! If the obesity doesn’t get you the bullet probably will.

If Syrians had any humanity they would threaten to invade the US; after all, any country where over 32,000 of its own are being killed by its own every year has some serious anger issues, and probably needs some externally sourced mediation! 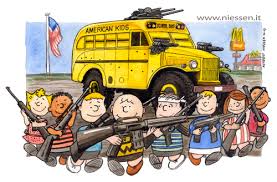 Then there is the advertising and accessorising of guns for little kids… a truly remarkable statement of a sick culture.

[All cartoons accessed from ‘images of…’ sites on the internet].

The style of entertainment has been slightly different this week, but I am still Juno, mainly because I don’t live in America. For those of you who do… stay indoors, lock all your doors, and listen out for the sound of the safety clip being released.

1 thought on “Tales from Dumbfuckistan”