Charles Dickens once said “I’m a Bluebird until I die”. That was Charlie ‘whatshisname’ (aka who the dickens is that?) sat somewhere in the Ninian Stand rather than the bard of London, Portsmouth and Rochester. At least that is what my nominated football watcher tells me, in a continuing state of delirium since Malcky’s Army downed the Manchester City juggernaut 3-2 last week. But perhaps the real Charles Dickens has already written the story of this season in the Premier League for the locals; as that most unlikely of results has now given rise to ‘Great Expectations’… if they can beat some of the richest, most overpaid of players, then just bring on the rest!

On the way to the ground for the next instalment, I am reliably informed that a scene reminiscent of the capture of the convict, Abel Magwitch, on the marshes was taking place, as Police vans, cars, horses and constables on foot escorted a relatively small group of the visiting fans to the ground. Greatly outnumbered, they offered nothing more than passive acquiescence. Cardiff City Stadium again provided an atmosphere as cauldron-like as Joe Gargery’s forge, with the locals open to accepting every lucky horseshoe coming their way. After all, this successful Everton team are not going to resemble any fading grandeur of Miss Havisham’s life.

In the book, the lawyer Mr Jaggers is the bringer of news of wealth from an anonymous benefactor. What is it that Phil Jagielka, the Everton captain, is saying to his manager Roberto Martinez, with a couple of days of the transfer window still open? There are other players on this team who may be contemplating Pip’s journey from the Kent marshes to the city of London, by moving away from the safety of their familiar Goodison home to a place in a more glaring spotlight. As for the home team, there would be more than a few hopes that a wealthy benefactor incarcerated in New South Wales would emerge to add to the Malaysian riches already decorating this part of old South Wales.

And so to another Saturday 3.00p.m. and the match kick-off, and one fan seems too overwhelmed by the tension of watching one man kick a ball a few inches to a colleague: 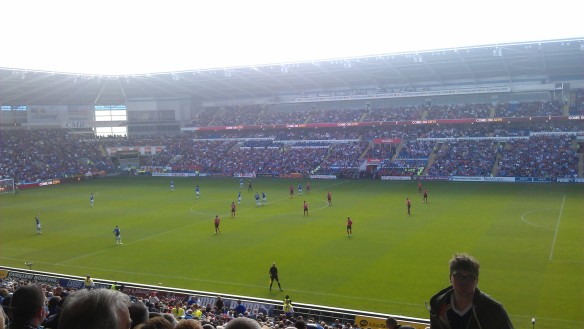 3.45p.m. 0-0… 4.05p.m. and it’s time to kick-off the second of this game of two halves. For those of you cats who have no interest in the intriguing story that unfolds as a back-drop to a tense 0-0 draw, but who hold a particular interest in the more colourful elements of life, the reds and the blues in the two pictures have completely turned around (or has my trusty photographer just walked around to the other stand?). 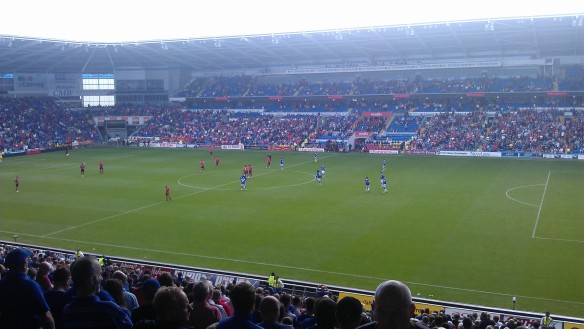 4.53p.m. 0-0… unless you are a supporter of either team that’s the summary of all the main action. The atmosphere generated by these passionate newcomers to the big-boys league was kept to a level of tension equaling that fabled return by the convict Magwitch as he is recaptured on the Thames.

The talking point of the game, as with so many, emerges in the post-match interviews. One side saw a nailed-on penalty and enough evidence that they should have finished with deserved victory; and the other side saw a good tackle and an even game that finished with a fair result. One thing seems very certain in the partisan world of football… a true fan sees what they want to see, not necessarily what really happened!

My nominated eyes on the game may be slightly biased, but they said Cardiff are fully deserving of four points at home against two teams from the top six last season. All of these numbers are doing my under-nourished sensibilities no good. To me the most significant numbers are 0-0… Charles Dickens would have to re-write his ending between Pip and Estella (again) if he was to equal the intensity of the story that had just unfolded on the pitch, according to my personally deluded reporter. Perhaps it is a score like this that cries out to be described in the gilded oratory of Stuart Hall, only without the heinous sex offences. I have been Juno, your Dickensian reminiscence benefactor, hoping to speak with you again soon.