What do I know about football? Well, back in the 1960’s, so I am told, there was a goalkeeper called ‘The Cat’ (Peter Bonetti, for you know-it-alls). Like me, he was known for being graceful, and only exerting himself on the rare occasions when he had to. Also it is back in the early 1960’s, according to my buyer of the food, that the local bunch of so-called football players did any good. So, it seemed like I have arrived in a place of sub-standard football, which is probably why they all seem to go on a bit about that strange egg-shaped ball that they all huddle around.

Not being the cool one to take all the credit, it seems that since my arrival in this pleasant city their football team has been doing rather well. Even jumping around on open top buses without paying any fares. As winners of the Championship it seems to have driven lots of the locals to go around shouting ‘we are Premier League’ as they enter a summer long dream world before reality strikes in mid-August. I think they are playing their first game in the promised land at my old manor… West Ham in the old Borough of Newham. From what I can remember this new lot should beat that old lot, but then… I will listen out for the sounds of mayhem or despair, and hope to still see food in my bowl.

So who do I attribute this new-found air of confidence to? It can’t be the players, as they were struggling most home games since the turn of the year, so I kept hearing. Something must have been going right around the club. It could have been the rich owner guy from Malaysia wearing his shirt inside his high waist-band trousers (bit of a strange look to be inspiring people if you ask me). Then there was this man with a strange way of talking, constantly doing impersonations of people from Glasgow, and waving his arm in a strange fashion. Got many of the fans chanting ‘Doing the Malky’ for some reason or another.

Anyway, I thought he was good as the prison guard in ‘Porridge’, and he seems to know what he is doing along the road at fortress Cardiff City Stadium. All-in-all he seems to be a nice man, that Mr Mackay. 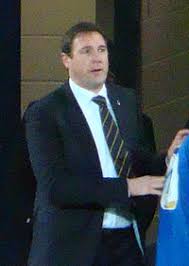